Well, sort of, at least.

My last post was on the recent crisis in world-building I had been having with my current main work-in-progress, Dreadship Omnipotence. Since that post, the crisis has spiralled out of control, to becoming a plot-construction crisis, and then finally a character crisis.

It turned out I was telling the wrong story.

The moment of epiphany came shortly after my reworking of the plot and its central elements, and I turned to thinking about how the changes in the world and plot would affect the characters. I quickly came to the conclusion that the heart of the problem was that I had the wrong protagonist.

Why was Idim Jyn, dashing captain of the Lysandra, the wrong protagonist, you ask? There were several reasons:

-He was a walking cliche, and much of his personality was based off of Captain Korso from Don Bluth’s Titan A.E. (a great film if you haven’t seen it; go watch it now and come back to this post later) and Firefly‘s Mal.
-He was, ultimately, kind of an asshole/would develop into one, and while I liked some elements of his character, I could see other elements of it becoming huge annoyances for me as a writer, and potentially for readers, later on.
-He did not really fit in with the world I’d built; he was a little bit too much of an oddity.
-Perhaps most seriously, he was setting himself up to be too passive. The way his past was constructed, his lowly status, and his lack of ambition meant that he would be taking a backseat to the interesting stuff. And after my first (terrible) trilogy with a similar protagonist, I didn’t want to do that again.

So, Idim Jyn was bumped out of the main protagonist role. He’s still in the story, just not as the captain of the ship. Who replaced him, you asked? A character who was originally a villain: Seraph Gavriela Adenai, more widely known as Ghosteye Spectra, the captain of the Eidolon.

Seraph/Spectra is a much more interesting, and less cliche, character than Idim. Her introduction showcases that; she is much more willing to kill than Idim is, she has an interesting way of killing, a pair of pistols that allow her to shoot through walls and download the consciousnesses of those she kills, and she has a strange ability that will form part of the core of what will become the Dreadship Trilogy: the ability to see through everything. Unlike Idim, a low-life smuggler at the bottom of the social heap, Spectra is a feared and respected pirate and assassin, with a great deal of influence in the underworld. Unlike Idim, she is in a position to get things done. And, on top of all of that, she has a burning ambition inside of her. Unlike Idim, who was to bumble his way through discovering the godlike power he had acquired, Spectra will embrace that power, use it, and direct it. Spectra is not bumbling; she is much more competent, yet deeply flawed in a way Idim was not. She is, in some a much deeper and more unique character.

Unfortunately, this shift in character did entail a drastic shift in the plot and world of the novel, and also prompted me to reconfigure my characters. I previously had a main cast of between ten and twelve main characters, depending on what you defined as “main.” I have now cut it down significantly, to six and a half: Spectra herself, her first mate and navigator Tathal Litenz, her cyborg engineer Melkorh, her software specialist and resident hacker Idim Jyn (told you he was still here!), the orphan artist Lemi, their “temporary” sniper Khoresh Eylkaum (though she just might be cut as well), and the half-main character, the crew’s part-time intern Obri Hathorken. The previously larger cast has been distilled into these six and a half figures.

The plot itself has also changed, but I won’t say much on that at the moment. More dramatically, the world has changed significantly. It still has the same general outline – it’s still a cyberpunk space opera – but a few elements have changed substantially. The major change revolves around the plot’s central theme: human evolution and godhood. Namely, transhumanism and posthumanism are much more pronounced now, and instead of one god-type figure being present as the antagonist, the entire universe is set against the backdrop of a host of powerful “godlings” that mankind created to protect itself from… well, ultimately, from themselves. It’s quite a different world, and it feels much fuller and better put together now, and all of the pieces are falling into place!

This does mean, however, that I have to start over largely from scratch. I have, however, already completed the first chapter, and am working on the second now, and writing it is a lot easier! Before I leave you to get back to work, I’ll leave you with two things: the updates synopsis, and my rough sketch of the new protagonist, Ghosteye Spectra (excuse my poor artistic abilities!):

Humanity stands on the brink of the Third Godwar, a conflict that will end human history and set the race on a new evolutionary path. As the godlings that rule over humanity prepare for war, a powerful weapon capable of killing a god falls into the hands of an ambitious space pirate, who soon finds herself standing at the crossroads of humanity’s future. 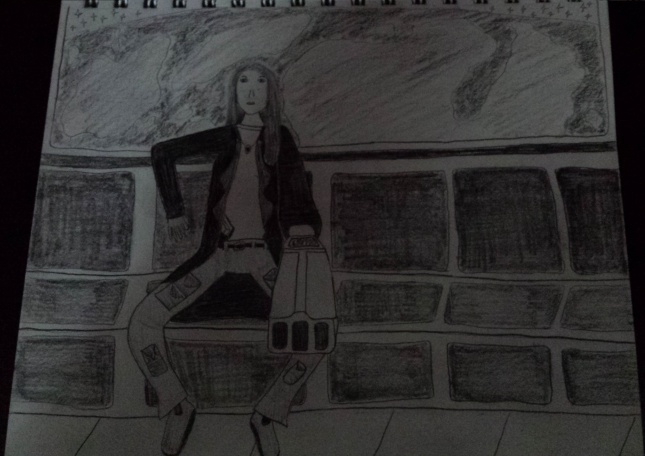